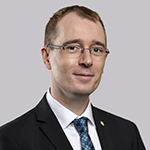 Andras Becsei graduated at the Budapest University of Economic Sciences and Public Administration with a finance degree. Simultaneously with his studies he completed a scholarship at the University of Southern California in Los Angeles. He holds a CEMS Master in International Management degree from the University of Cologne and an MBA degree from INSEAD Singapore. He started his career as a Mergers & Acquisitions analyst at MOL in 2000 and then he worked at Ruhrgas in Essen. From 2002 he worked as consultant and project manager at McKinsey & Company until May 2009 when he took over the Managing Director position of OTP Bank’s Retail Subsidiary Management and Business Development Directorate. From March 2012 he directed the Bank’s Retail Product Development Directorate until December 2016. Since January 2017 he is the Managing Director of OTP Bank’s Budapest Region. In addition he is the Chief Executive Officer of OTP Mortgage Bank and OTP Building Society since April 2014. He is also the Vice President of the Hungarian Banking Association. He served President of the Hungarian Banking Association from July 2019 to May 2020.