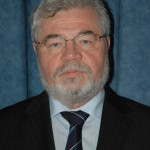 Henrik Auth was employed in state administration from 1976 to 1990, his last position being Secretary of State. This was followed by a career in the financial sector, spanning 23 years.

In 1990, he started working in deposit at HSBC’s office in Hungary.

Between 1995 and 1998 he was Deputy CEO and Member of the Board at Magyar Hitelbank Rt., then Chief Executive Officer at its successor, ABN-AMRO.

From 2008 to 2010, he became the Chief Executive Officer of OTP Bank in Serbia and the Chairman of the Board of Directors at OTP’s subsidiary in Montenegro.

From 2010 until his retirement in 2014 he served as Chairman and CEO of Garantiqa Hitelgarancia Zrt. In the past years he has been Chairman of the Ethics Committee at the Hungarian Banking Association.