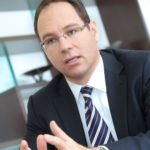 Previously, he served as Chairman and CEO of MKB Bank Zrt. (owned by the BayernLB Group) from March 2012 to April 2014. Before he was appointed, he served as member of the Board at the same bank from 2008 to March 2012, and as Deputy Chief Executive of Strategy and Finance. In addition, he also supervised the steering of the capital management, the HR, and the group and shareholder departments. He served as Chairman of MKB Bank’s Asset-Liability Management Committee (ALCO) and its Bank Development Committee.

Before taking his first managerial position in the banking sector, from 2000 to 2008 Mr. Simák was a partner of McKinsey & Company, and lead several financial institution projects on incentive schemes, lean activities, management after mergers, cost optimization and strategic growth opportunities in Budapest and Eastern Europe. He also earned his place as a member of the group of financial institution leaders in Central & Eastern Europe.

Dr. Simák gained his first professional experience in banking at the Royal Bank of Canada, where he worked as a consultant and joined the bank’s risk policy group as well.

He graduated from the University of Toronto in 1997, where he earned a Master’s degree in Applied Science and his PhD.