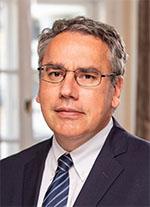 Professor Levente Kovács has been the Secretary General (the primary leader of the work organization) of the Hungarian Banking Association since June 1, 2011. He previously served as Deputy CEO at KDB Bank. From 2002 to 2006 he worked as Managing Director at the development and subsequently business department of GIRO Ltd. Before this, he served as Marketing Director in Corporate Banking at Budapest Bank, as head of product development at HypoVereinsbank and Head of Department at CIB bank.

In 2012 Dr. Kovács received the Knight's Cross of the Order of Merit of the Republic of Hungary for his public, educational and publication activities.