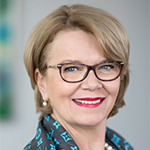 dr. Éva Búza obtained her degree from the Faculty of Law at Eötvös Loránd University, later also passing her Bar examination here. After graduating from university, she worked as a junior lawyer and subsequently as a lawyer, with her career quickly steered towards the financial sphere: first she worked at the former Kvantum Investment Bank Rt., then she became the chief legal advisor of the Hungarian Development Bank.

Later on, she took the position of business deputy CEO at the Hungarian Development, after which she became leader of Magyar Posta Tetra Rt., while also working at the Central Bank of Hungary.

From 2004 to 2010 she held several leading positions at MÁV Zrt. She became business Deputy CEO of Garantiqa Hitelgarancia Zrt. in 2010, taking the role of Chief Executive Officer in 2015. Under her leadership, Garantiqa Hitelgarancia Zrt became a defining actor in SME financing, as the strategic partner of domestic commercial banks, standing behind one in every five SME loans as guarantor.

Thanks to its efficient cooperation with bank partners (who are also concerned in Garantiqa’s operation as shareholders), Garantiqa has been dynamically growing since 2015, having closed the most successful business year of its existence in 2018.